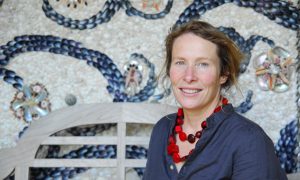 Kerr-Wilson’s fascination with shells began as a young girl, informed by her love of grottoes, follies and any secret place in a garden. Later, when studying for her degree at the Goldsmith Art College of London she kept her hobby to herself, while she studied the more acceptable medium of sculpture. Shell work had acquired a kitsch-factor in figurative work since the 1970s and to date no shell artist had succeeded in dispersing this sentiment. Despite this, Kerr-Wilson created her first total shell interior in her own London flat in response to a competition run by the prestigious publication World of Interiors, which she won. Even having been awarded such significant recognition, the accolade was still not broadly appreciated by her college contemporaries. However, Kerr-Wilson’s secret obsession survived skepticism and international commissions poured in. Since that time, she has travelled the world creating shell installations and framed individual works.

Kerr-Wilson’s designs are informed by the mathematical nature of shells and their movement and color. It was a commission in the Caribbean that initially freed Kerr-Wilson from the traditional use of many different types of shell in one piece of work. For the first time she began using two shells exclusively, the common mussel (Mytilus edulis) and the abalone (Haliotis). Bivalve shells, such as mussels, have a left and right half. By the careful setting of hundreds of these halves, the resulting compositions give an illusion of movement – shells sweeping in one direction and then reversing, as if tossed in the sea.

This graphic style is one that Kerr-Wilson has continued to explore. “One of the most startling aspects of Kerr-Wilson’s work is its graphic quality. She has created, for example, a circle of purplish-blue mussel shells next to waves of miniature white abalone. From a distance, it appears as an almost solid disc; only on closer inspection does the viewer see the medium. Even then, the shells have an intricate sense of motion, so that some doubt remains as to what you are actually seeing. “It’s all to do with how the light plays on the piece,” she says.” (Extract from “Contemporary Natural” – Thames & Hudson Ltd by Phyllis Richardson and Solvi dos Santos)

Kerr-Wilson’s pictures are also inspired by the drawings of Ernst Haeckel (1834-1919, zoologist) and the sketches of Nigel Peake. However, Kerr-Wilson keeps in mind the energy and visual impact of a school of fish all moving together like one. With this she brings to mind fluid movement and iridescence reminiscent of the sea, an idea perfectly distilled in the use of perhaps her favorite shell, the mussel. The appeal of this particular shell is not just the fact that it is bi-valve, but its iridescence and strong colors of blue, purple, black and white. The light, catching the surface of the shells, emphasizes texture and form and Kerr-Wilson plays with this to create studio pieces that bring shell work to a mesmerizing art form. In the main, Kerr-Wilson works on commission; however, Kerr-Wilson’s most recent work is a series of framed pieces entirely of her own concept. It is these extraordinary works that break the boundaries of her chosen medium. Kerr-Wilson’s work is also featured in the following publications as well as numerous magazine/newspaper articles:

Thames & Hudson, The Shell, 2007, by Ingrid Thomas – a much-documented book on shells and their use in architecture, furnishings and craft through the centuries. Blott’s contribution to this art form features significantly.

“The Shell – A World of Decoration and Ornament” by Ingrid Thomas